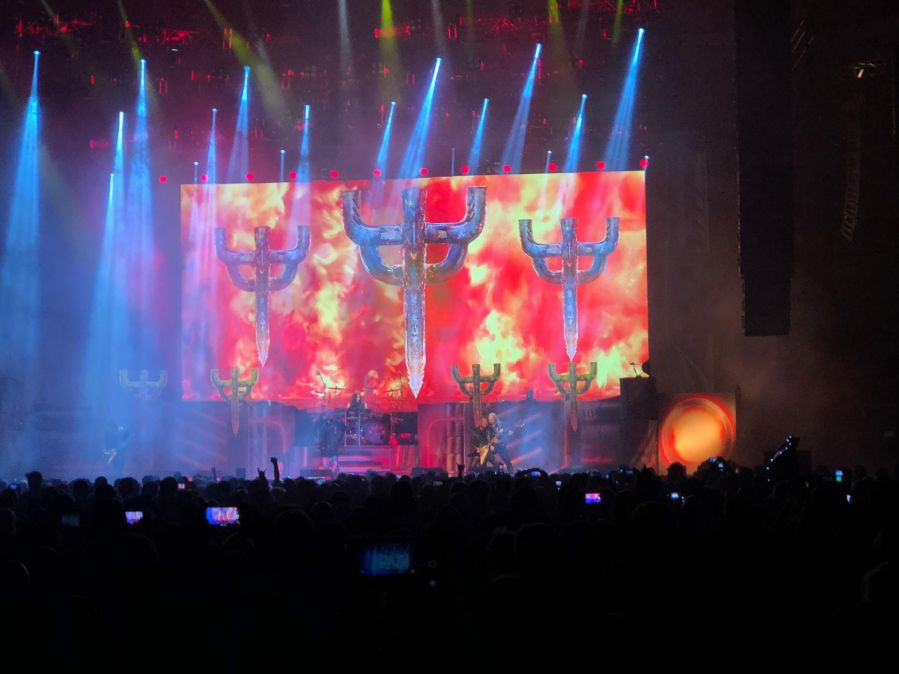 The first time I saw Judas Priest live was at Ozzfest 2004, where they opened for Black Sabbath. Before then, I couldn’t name one of their songs to save my life. In the back of my mind, Judas Priest was some niche leather and studs band that had chosen to glorify the name of the disciple who betrayed Jesus (this is due to my sheltered, evangelical Christian upbringing). Even though I had already long walked the forbidden halls of heavy metal by 2004, I still hadn’t been acquainted with Judas Priest. Their performance at Ozzfest changed everything – I hung on every tempo shift, blistering solo and screeching wail, delighted and surprised at every corner, mind blown by the power and energy they delivered. No band to that date had managed to keep me at such rapt attention for their entire set. I was blown away.

Flash forward to last night at Showare Center in Kent, Washington. Touring in support of their recently released Firepower album, Priest blew me away again. I have heard Rob Halford sound tired before, but last night he was absolutely energized, pushing his vocals and delivering the high notes beyond anything I heard him do during the Angel of Retribution and Nostradamus tours. Any preconceptions I may have had about the band growing a bit tired with age were decimated in a molten hail of heavy metal as Halford and crew raged through their set list. From the opening song (“Firepower”) until the closer (“Living After Midnight”), and through middle numbers from the whole of their considerable catalogue, Priest were utterly riveting. “Painkiller” was a highlight, as it always is, but the real treat came when Glenn Tipton, who had announced earlier this year that he would no longer be touring with Priest due to his struggles with late-stage Parkinson’s disease, joined Halford, Hill, Travis, Faulkner and Sneap on stage and performed the three-song encore set.

Tipton’s appearance on stage ignited the entire crowd of fans, who roared their approval. The love, support, and appreciation that filled Showare Center in that moment was overwhelming. 70 years old and fighting a degenerative disease, Tipton laid down his part like the living legend he is. THAT is Metal. It was touching, bittersweet, and a moment in history that nobody in the crowd will ever forget.

Thank you Glenn, and thank you Judas Priest.

While this goes down in my book as another of the greatest shows I have ever attended, Showare Center gets an ‘F’. Their floor is large enough to house the Seattle Thunderbirds ice hockey rink, and they chose to fill it with assigned folding chairs. They packed us in like sardines, no space to move at all, and so we stood stationary through the entire show. This situation really placed a barrier between the attendees and the band, and negatively affected the experience. When you pay as much for GA Floor tickets as we all did, this setup is unacceptable.

Lastly, there was no liquor available. While I understand the knee-jerk fear behind serving liquor to metal fans, the beer-only approach is just lame. The venue was geared more for Disney on Ice than a metal show, and it sucked. Shame on you, Showare Center!